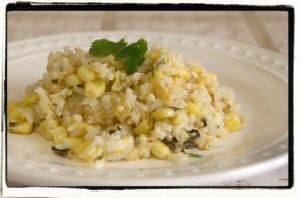 This dish is quite the treat… we enjoy it as a side with tacos, enchiladas, etc. It also makes a lot of leftovers (and rewarms nicely). So, we make a feast of it for several days! N-I-C-E!!!

A few months ago I was watching the Food Network show The Best Thing I Ever Ate. Chef Aaron Sanchez was waxing poetic about his mother’s rice dish … she made it for him as a kid. She now serves it as a side dish at her New York Restaurant. Check out the story and the original recipe online: Creamy Poblano Rice. (Disclaimer: For our tastes, I’ve made some slight adjustments to the process.)

And… this is how I do it… I start by firing the peppers at least a day ahead of time. Place them right over the flames and watch closely. Rotate the peppers until blackened on all sides. (It’s very important that all of the skin is blackened … otherwise the skin won’t completely peel off after steeping.)

In the last six months I have realized my love of poblano peppers! They are usually very mellow peppers – which is good for this wimpy Norwegian/German girl. But every now and then you might get one that heats you up a little more. You just never know… 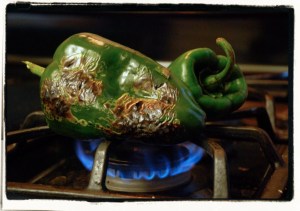 With tongs, I move them into a plastic bag to steep. The moisture from the heated peppers collects inside the bag and helps w/ the steeping process – this process will help the skins peel right off, especially with a little help from some running water (or a dunk in a bowl of water).

Once the peppers cooled down, I placed the whole bag in the fridge.

And when I’m ready to have this for dinner… here’s where I start. 2 cups of white rice.

While the rice is cooking, I work on those peppers. This is what they look like right out of the bag. (These had been in the fridge overnight.) You’ll find that most of the skin slides right off the meaty part of the pepper. Some of it might need some slight help with some running water.

They practically fall apart in your hands. So the next step is easy. I cut it open so I can remove the seed pod and cut away the ribs.

And lay it flat…

And cut it into think strips… and from here it’s easy to dice it up.

In the meantime, the rice is done cooking. So, I’ve spread it out onto a cookie sheet to cool, uncovered.

And back to the vegetables. Here’s how I cut an onion…

First, I cut off just a tad of the end (not the root end). Second, cut the onion in half from root to cut end. Third, from both halves I skin the onion. Fourth, using my Santuko knife, I cut slices long ways (again, from the root to cut end), but without cutting through the root. The root acts as a holder, to keep all of the onion strips together for the next step. Then I turn the onion to the side and finish off the dice… because the strips are still attached to the root it’s a quick dice.

Yep, it’s pretty simple… it may not be very technical or the way a chef would recommend. But it works for me… and that’s the key. Find the way that works … for you. 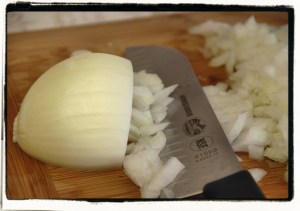 So, the pan and oil are hot. I added the diced onions, diced poblano peppers, kosher salt and pepper. And it’s starting to smell good already! 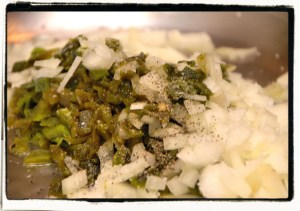 And it’s going to smell even better very soon… I spy garlic!

I think it was Tyler Florence who showed me this trick (on Tyler’s Ultimate, not in person!)… smash the garlic with the knife. Place the knife on top of the garlic clove, and smash the knife (but carefully) with the ball of your hand. It may need a whack or two… but the skin will typically burst right off and start to smash up that clove for you. Thanks Tyler… I love your kitchen tips!

Add the garlic to the hot vegetables, and keep it stiring. You don’t want that garlic to burn… so watch that the garlic doesn’t start to brown. (It gets bitter once it starts browning…)

While the veggies are cooking I start to work on the sour cream mixture. First – I want to chop up my cilantro. Have I told you how much I love cilantro?! I always use way more than the recipe(s) call for.

Drop the chopped cilantro to the sour cream and kosher salt combo. Stir it up. Set it aside. 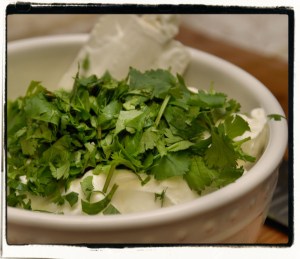 In the meantime, the veggies should be just about done cooking. But you might want to let them cool a bit. After all, you don’t want to melt the cheese as soon as they touch…

Next? Add the cooled rice… 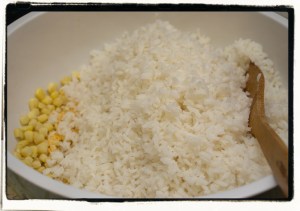 And give it all a stir… see what I suggested using a very large bowl?

Press the rice into a 9″ x 13″ casserole and slide it into the oven. About 25 mins from now you’re going to want to have a spoon in your hand… but careful, it’s hot.

Instructions
Bring the water to a boil in a medium-size saucepan over high heat and add liberally add salt. Add the rice and bring to a boil. Reduce the heat to very low, cover the saucepan tightly and cook for 20 minutes. Remove the rice from the pan and spread on a baking sheet to cool, or allow to cool in the pan uncovered.

Meanwhile, preheat the oven to 350 degrees F (if using a Pyrex baking dish, set the oven at 325 degrees F).

Heat the oil in a heavy skillet over medium-high heat until very hot but not quite smoking. Reduce the heat to medium, add the chopped onion and garlic, and cook, stirring until wilted, 2 to 3 minutes. Add the poblanos and cook, stirring, for 1 minute. Let cool, then combine with the rice. Mix in the corn, sour cream mixture, and shredded cheese.

Pour the mixture into a heatproof baking dish or casserole and bake until heated through, about 20-25 minutes.

enjoy your time in the kitcen…