Heading south on the 15 freeway, on the way to day #2 of a ridiculously fun weekend with a great group of girlfriends! It was early on Saturday morning… and there were few people on the freeway. I was in “still-waking-up” mode, sipping on my iced coffee and probably singing along to some tunes. My SUV was “flying” down the freeway (however I will not admit to my speed on the grounds that it might incriminate me).

And then … the truck in front of me changed lanes.

As the driver hit a bump in the road the ladder in the back of his truck popped up off the rack and was airborne! I heard a crash, a scrape and the sound of metal crunching against metal.

And the driver kept going… no brake lights… no nothing (yes, the driver was a “HE” – how do I know?! because he was clueless of the problem happening behind him!)… 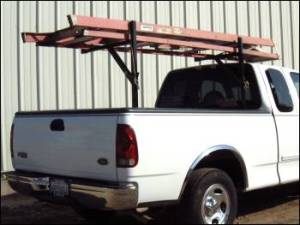 Still parallel to the ground, the ladder flew into the front grate of a work truck in the lane to my right… I had just passed the truck next to me, so it was slightly behind my right bumper.

It all happened so fast, but it looked like the ladder flipped, and then got run over by the truck. Immediately the driver hit the brakes and veered off to the shoulder of the freeway. How he didn’t hit someone else in the process was a miracle… thankfully few people were on the road so early in the morning.

In my mind, as I replayed what had just happened, I watched that ladder fly by my passenger window. It dawned on me that IF it had flown out while that truck was still directly in front of me it would have hit my vehicle at a higher elevation than it hit the truck next to/behind me. Could it have potentially gone through my front windshield?!

Thankfully, there are only a few times in my life that my livelihood has flashed before my eyes. But everytime that “flash” happens, well… I thank the Lord on High for not taking me home to Him yet. (Not that I’d complain if He did… selfish me just wants to stick around here a bit longer.)

I love my life. I love my work (on most days). I love my husband (except when he … well, enough said). I love how I’m finally meeting some of the goals I’ve had for a long, long time.

When it comes down to it, while I believe I would “be ready” when that day comes … this was yet another reminder that my days are numbered (as if the time the door flew off the minivan while I was waiting to cross a busy intersection downtown San Diego wasn’t enough… or the time I stopped on the side of the road to stop a man trying to choke his girlfriend, to death… or the time… well, you get the idea).

Am I living how I’m supposed to live? Will I leave behind the legacy meant for my life? What else does God intend for this life before He calls me to His side?