Tried another new recipe tonight. Note to self: Use the optional ingredients next time! (I didn’t this time ‘cuz I didn’t have them). But after tasting this, it changed my mind on the “optional” term. Going forward, recipe will read “mandatory”.

This is where I started… with the “mise en place” [meez-on-plos]. That’s a froo-froo sounding French term for “everything has it’s place”. I always start with the prep of the ingredients.

I cut the kernels off the cob, leaving the root in tact on the ear. I wanted to get at that beautiful cream inside the kernel to add even more flavor to this risotto. 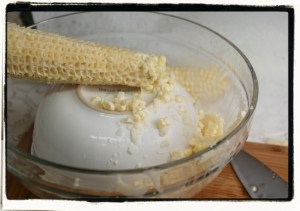 To extract that flavor, I ran the back side of the knife down corn kernels and it pushed the cream right out. I mean just LOOK at that flavor! And believe me, you want all of it! 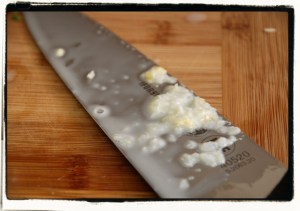 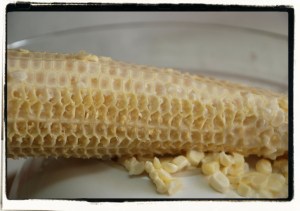 The upper row of corn still has the cream in it. The bottom row of corn shows the openings where the cream had been hanging out… waiting for this exact moment in time.

I also cut up my leeks. You know what a leek is … it’s what looks like a green onion, only on steroids! They taste kinda oniony… but with a rather mellow taste. Since leeks are layered like onions and grow up through the soil, they are likely to trap some dirt between their layers. So, I cut the leek lengthwise, and then diced into half-moon shapes. Then I threw the leeks in a large bowl of water. The dirt sank to the bottom while the leeks floated on top. I strained them out, and onto a rag for a quick pat-dry.

Then I moved to the stove… 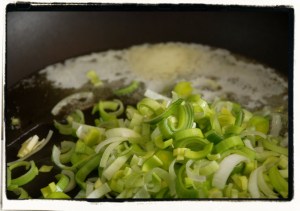 Second: add arborio rice, allowed to hang out for a while to take on the oil. Before I moved on, I added the wine and allowed it a few minutes to evaporate/soak up into the rice…

Third: add creamed corn (cream and all), followed by 1/2 cup of boiling stock and the stirring begins. 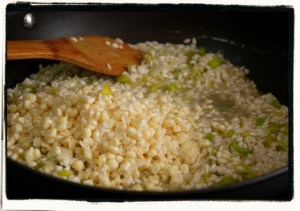 Watch those beatiful rice grains puff up … they are puffing up with the cream from the corn, the chicken stock and a great leek flavor! Good stuff!

I kept adding more and more chicken stock… all the while continuing to stir until I just couldn’t stir anymore. After tasting it for flavor (does it need some salt? Yes!) I added the parmesan cheese and another small nob of butter… the perfect finishing touches!

We enjoyed this alongside some freshly grown green beans and grilled chicken tenders topped with more of that yummy anchovy dressing! < — we LOVE that stuff!

But don’t take my word for it… it’s so easy! You should try it too!

Instructions
In a large bowl (using smaller bowl turned upside down as a platform) cut corn kernels off the ears, cutting down the middle of the kernel (not at the root). Run the back of the knife along the spine of the ear, where the remaining kernels are still attached to ear. This will “press” the cream out of the corn and into the bowl below with the kernels. This is good flavor!

Add wine and stir until it is dissolved/soaked up by rice. Gradually pour in boiling stock, one ½ cup at a time, stirring continually. Add creamed corn and stir well. Leave uncovered and continue to add stock ½ cup at a time. Stir well and sample for taste. When nearly done add parmesan cheese and another nob of butter, stir well until all melted. Serve immediately.

enjoy your time in the kitchen…